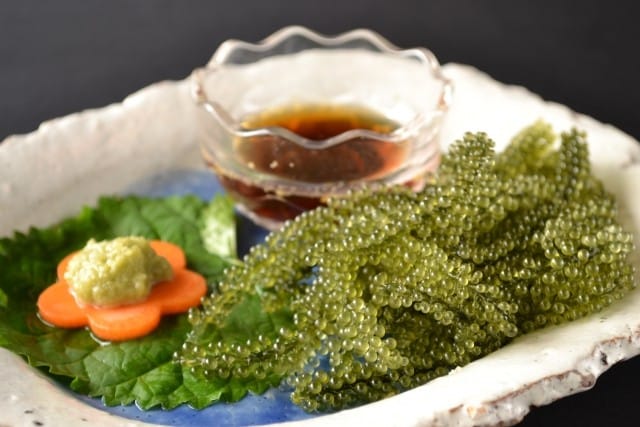 Okinawa is very different from Japan’s mainland in terms of its food and culture. From Okinawan soba to taco rice, the international influence and tropical weather have created some very unique local cuisine that is definitely worth a try.

Okinawa is very different from the main island of Japan in culture, atmosphere, language, and cuisine. The islands of Okinawa are in close proximity to China and Tawain and they are also the main location for a variety of United States Forces in Japan. These facts have influenced the local food visibly, making it one of a kind.

Okinawa’s Agu Pork comes from a breed of pig that was first introduced to Okinawa from China over 600 years ago. Agu pork is highly valued due to its scarcity. The meat has an intense marbling and a slightly sweet taste.

Ishigaki Island is a part of Okinawa famous for its luscious nature and delicious beef. It falls into the wagyu category, which is the same as the famous Kobe beef. It has a rich marbling and soft texture that melts in your mouth.

Sweet potatoes are found all over Japan but Okinawa is especially famous for its beni imo, or purple sweet potato. It does not only offer an impressive deep violet color but also a rich, dense flavor.

Usually, the word soba refers to buckwheat noodle dishes in Japan. However, in Okinawa, this kind of soba is not very popular and called as Japanese soba or black soba.

Okinawa Soba is reminiscent of ramen and consists of thick wheat noodles in a flavorful broth. The broth is traditionally made with an edible seaweed called konbu, bonito flakes, and pork.

A common variety is Soki Soba. Soki is the Okinawan word for stewed pork ribs. They are used as topping in this version of the soba often together with pickled ginger and scallions.

Picture from Hair Salon NALU In Tokyo – International And Fashion-Forward

Taco Rice is said to have been invented in Okinawa in the 1980s by a Japanese restaurant owner wanting to cater to the taste of the American soldiers visiting his restaurant. Observing the fact that many of them seem to love tacos, he put a Japanese twist on this dish, which is quick and easy to make.

The base ingredients are ground beef, lettuce, cheese, and tomatoes served on rice. The ground beef is seasoned with typical taco meat spices, making it reminiscent of the Tex-Mex dish.

The word champuru refers to something being “mixed up” in the Okinawan language. Goya is the Japanese word for bitter gourd, which is a vegetable used often in Okinawa dishes.

Goya champuru is an Okinawan stir fry. The traditional base consists of egg, tofu, goya and also some form of meat, often pork belly or SPAM meat. Champuru is often used in Okinawan households as a way to use leftover vegetables and meat.

Hirayachi is a savory pancake unique to Okinawa. It has a base consisting of eggs, flour, salt, black pepper and green onion, and can be eaten without seasoning or dipped in a sauce made of soy sauce, vinegar, and sesame oil.

Hirayachi is a traditional emergency food in Okinawa. In many remote areas, bad weather can still cause power outages; hirayachi can easily be made on a portable gas stove with ingredients everyone usually has on hand.

Rafute is a braised pork belly dish slow-cooked in awamori (Okinawan distilled liquor). The sweet and savory dish was inspired by Chinese cuisine.

Every family and restaurant has its own unique recipe. This is why it is highly reccomended to try it at different locations when visiting Okinawa.

Onigiri, or rice balls, are a snack choice enjoyed all over Japan. However. the SPAM and egg onigiri is very specific to Okinawa. It is a sandwich-type onigiri that contains SPAM meat and fried egg, sometimes omelet, sandwiched between rice and nori seaweed.

Due to Okinawa’s American influence mentioned before, SPAM meat is very popular. It is used in many different dishes from champuru to miso soup.

9. Mimiga – Delicious with the Local Alcohol

Mimiga might be a more acquired taste as this dish consists of boiled or steamed pig ears. The Okinawans have the saying “every part of a pig can be eaten except for its hooves and its oink” and mimiga proves this point.

This crunchy side dish is usually served with mayonnaise, ponzu sauce or peanut dressing. It goes well with the local alcohol.

Umibudo translates to sea grapes in English. It gets its name from the fact that it looks like tiny strings of grapes. It is a type of edible seaweed that only grows in the warm waters of Okinawa.

Umi budo has a refreshing but salty taste. The little balls pop in your mouth releasing a salty liquid. The mouthfeel is similar to caviar which is why some people refer to it as “green caviar”. Umi budo can be used as a garnish for many types of food or eaten straight with soy sauce, vinegar or plain.

Sukugarasu is usually an izakaya (Japanese bar) food consisting of tiny pickled fish served on small tofu cubes. The reason why it is served on tofu cubes is that is simply too salty to eat by itself. The soft tofu acts like a cushion and mellows out the salty flavor and the crunchy texture of the pickled fish. It is another dish usually served with alcohol.

Yushi dofu is soft tofu that hasn’t been dehydrated or pressed in shape. It is very flavorful as it still contains some of the brine (saltwater solution) and a full soybean taste.

Yushi dofu can be eaten by itself with soy sauce, used in miso soup or even on soki soba. The texture and flavor profile are very unique and people who usually think tofu has no flavor should definitely give it a try.

Jimami dofu is tofu-like dish made from peanuts. The springy texture is archived by mixing the liquid extracted from peanuts and sweet potato starch. Usually, no soy is used.

Jimami dofu is creamy and slightly sweet and it is usually eaten plain or with soy sauce. While it can be tried at bars and restaurants throughout Okinawa, it is also available pre-packaged in supermarkets and souvenir shops.

Tofuyo is a fermented tofu delicacy made with awamori. The texture is said to be that of cream cheese and the taste is strong with the alcoholic note of the awamori clearly present.

Tofuyo used to be only available to the emperor’s family and few privileged nobles during the Ryukyu Kingdom era as it is very time-consuming to make. Nowadays it is freely available to anyone and if you like strong flavors it is worth giving it a try.

Abura miso is a rice topping made from miso (fermented soybean paste) that is cooked with sugar and pork to form a paste. It is normally used to top white rice, in rice balls or as a vegetable dip.

Abura miso is rich, sweet and flavorful. It only takes a small amount to flavor any dish of your choosing. Souvenir shops sell abura miso in small glass jars and it makes for a unique souvenir for any rice lover.

Sata Andagi is often refered to as the Okinawan doughnut. They are small, dense and crunchy deep-fried cake balls. Their texture and flavor is reminiscent of old fashioned doughnuts.

Black sugar, or molasses, is the star ingredient in Sata Andagi. It gives it the sweet and smoky flavor. The most common Sata Adangi are plain, but they do also come in typical Okinawan flavors such as purple sweet potato.

At first glance, Chinbin might look like ordinary pancakes. However, it is another treat featuring black sugar which makes it rich in flavor and slightly moist in texture.

Chinbin can be bought premade but the most common form is chinbin powder mix which works just like usual pancake mix. Why not taking some chinbin mix home with you and surprise your friends and family with Okinawan pancakes?

Chinsuko is a very famous souvenir to bring from Okinawa. They are oval-shaped cookies made with wheat flour, sugar, and lard. In flavor, chinsuko is reminiscent of shortbread cookies but it is much more fragile and melts on your tongue as soon as you bite into it.

Chinsuko are often found in plain, black sugar and sea salt flavors. Salt cookies are generally common in Okinawa. The sea salt it really brings out the flavor and cuts through the sweetness.

Picture from Blue Seal – Okinawan Ice Cream And The Best Japanese Crepes In Tokyo!
Okinawa is the hottest place in Japan––even in winter, it rarely drops below 15°C. Ice cream shops can be found everywhere with some carrying flavors unique to Okinawa.

Blue Seal is Okinawa’s most popular ice cream brand. These days, Blue Seal shops can be found all over Japan, offering Okinawan flavors such as shikuwasa, purple sweet potato and salt cookies.

Sea salted ice cream is also very popular in Okinawa. It can be found at many ice cream stores as well as in the freezer section at the local supermarkets. The sea salt is believed to replenish the salt lost from sweating in the Okinawan heat.

20. Shikuwasa – The Refreshing Taste of Okinawa

Shikuwasa is a small green citrus fruit native to Okinawa and Taiwan. Its flavor profile is somewhere between lemon and grapefruit and it is mainly used to flavor dishes in a way lemon and lime would be used.

Shikuwasa is a flavor strongly associated with Okinawa. Shikuwasa flavored items include anything from drinks, to over ice cream, to salad dressing.

Okinawa is always worth a visit. The unique culture and endless beaches make it a favorite vacation place even for Japanese people.

As introduced in this article, Okinawa has a one-of-a-kind taste due to weather and international influence. When in Okinawa, make sure to try the local cuisine with a refreshing glass of their famous, local Orion Beer.